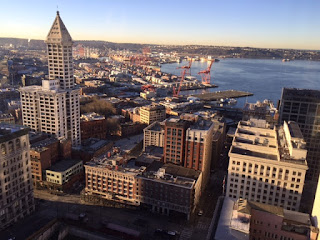 Shin's family with Korean and Chinese backgrounds were immigrants to Canada, before he moved to the US. He explained many of the reasons why Asians were attracted to Canada, specifically due to the immigrant investor programs that granted permanent Canadian residency at the price of a five-year $800,000 interest-free, government-guaranteed loan, with no requirement to start or invest in a business. That program was terminated in 2014, and triggered a search by Asians looking for a safe haven to invest in real assets.

Currently, China, the world's second largest economy, holds $4Trillion in US currency. They are the largest holder of US treasuries, but many Chinese are looking for better returns by investing in real assets. Their own stock market has become increasingly volatile, while their economy is making a painful adjustment from an exporter to more domestic consumption.

A very popular 2013 Chinese romantic movie "Beijing Meets Seattle" sparked interest in the city of Seattle, just as the Canadian immigration program was winding down. Seattle-Bellevue housing prices are still comparatively inexpensive for Asian investors, in contrast to other world cities like Los Angeles, San Francisco, New York or London.

In addition, Seattle boasts a higher quality of life, with clean air, and good schools. It is an attractive market for foreign investors looking to mitigate their geopolitical risk and diversify or preserve foreign wealth.

The USA's EB-5 Visa program is now attracting a majority of Asian investors. The EB-5 Visa program provides a separate immigration visa for foreigners who invest capital and create full-time employment for US workers. 10,000 visas are awarded each year, with 85% going to Chinese investors. The program capped out for the first time in August of last year,

This foreign investment is a great driver of the US economy,generating over $13 billion in investment since 2008, and creating well over 29,000 jobs. EB-5 is exploding in the Seattle metro area, and a lot of big commercial, governmental and residential projects are being funded by Chinese investors.

A savvy investor will want to keep an eye on this trend for the Seattle real estate market. It will only be getting bigger!

Happy Investing!
Posted by Wendy Ceccherelli at 10:19 AM