According to research from CBRE, investment in U.S. multifamily reached $127 billion for the year ending Q2 2015 - the highest four-quarter total in history and growth of 36% over the 12-month period. The total surpasses the mid-2000s peak of $100 billion achieved in the year ending Q2 2006.
Investment in multifamily communities has been robust for several years and this trend continued during Q2 2015, with $30 billion flowing into the sector. The quarter's total reflects a 35% gain over Q2 2014, although a slight decline from Q1 2015 (-3%). Multifamily acquisitions represented 27% of the total $110 billion invested in U.S. commercial real estate in Q2 2015.
The Los Angeles-Southern California area attracted the most multifamily investment in H1 2015 at $5.3 billion ahead of Dallas/Ft. Worth ($3.0 billion), Washington D.C. ($3.0 billion), Atlanta ($2.8 billion), and Houston ($2.5 billion).
Cross-border investment in U.S. multifamily totaled $2.1 billion in Q2 2015 (not counting properties acquired through entity-level acquisitions). The H1 2015 total of $4.4 billion is already higher than the full-year 2014 figure of $3.7 billion. Mexico represented the largest country source of cross-border acquisition capital for multifamily investment (31%), due to a significant portfolio transaction, ahead of Canada (29%).
"Investment in U.S. multifamily product continues its extraordinary run, reflecting solid confidence in future market and asset performance. Drawn in by solid fundamentals, investor interest in the sector remains high, per sales activity and underwriting trends. Equity and debt investment volumes continued to rise, along with transaction sales prices. Cap rate declines have been minimal, which signal total projected investor returns are close to bottom," said Brian McAuliffe, Executive Managing Director, Institutional Properties, CBRE Capital Markets. 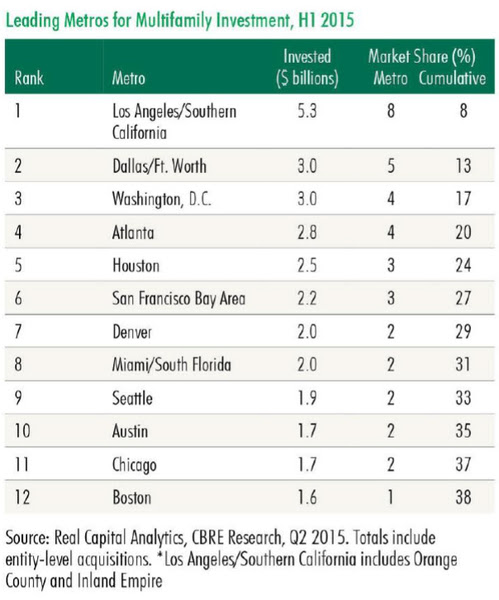 Demand for apartments is unrelenting as new supply has been swiftly absorbed. As a result, the average apartment rent across major U.S. markets is increasing at a pace far above the inflation rate, and the vacancy rate is at its lowest point in nearly 15 years.
Rent growth was widespread in Q2 2015, with 30 of the 62 markets tracked by CBRE posting year-over-year rent increases of 5% or more. The apartment vacancy rate across these markets was 4.3% in Q2 2015--down 30 bps from a year earlier and down 300 bps from the Q1 2009 recessionary peak of 7.3%. Vacancy is expected to continue to decline through the end of Q3 2015.
Almost 70,000 apartment units were completed within the 62 major markets during H1 2015. If deliveries continue as forecasted, the 2015 total will reach nearly 173,000 units--while less than last year's 181,000 units, the total is more than any other year since 2000.
"Accommodative economic conditions and employment growth will support further strengthening in multifamily fundamentals in the near-term. Demographic trends--including the 30-year low home ownership rate of 63.5% suggest that the apartment sector will continue to absorb new deliveries over the next two years." said Peter Donovan, Senior Managing Director, Multifamily, CBRE Capital Markets.