Yet another arts space has opened in Seattle. I attended the grand opening of 12th Avenue Arts yesterday afternoon. The black box theater in which the speeches took place was packed. 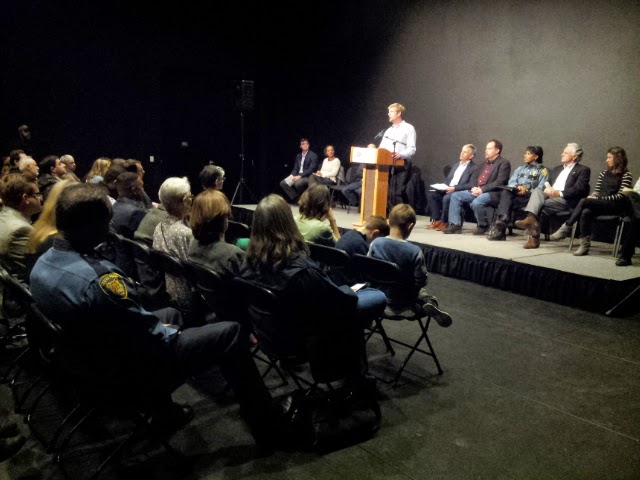 12th Avenue Arts is an unusual collaboration with several different partners. It includes 88 affordable apartments for families, and low-income residents in the otherwise-pricey neighborhood of Capitol Hill. It provides office space for Capitol Hill Housing (the developer of this space), Capitol Hill Chamber of Commerce, Three Dollar Bill Cinema and Seattle Academy of Arts and Sciences. It includes two theatres leased to Black Box Operations, a partnership of three local theater companies (first performances open in January 2015). It includes retail spaces to be occupied by several restaurants, adding to the culinary amenities for which Capitol Hill is know. And it includes secure underground parking for the Seattle Police Department's East Precinct. This is true mixed-use commercial development, befitting the dense urban village of Capitol Hill.

The stunning building was designed by SMR Architects, the same architects that I hired to develop Van Gogh Studio Lofts at the Rainier Beach Light Rail station. Kudos to SMR for designing a seamlessly beautiful and functional space to provide ongoing cultural and culinary amenities for this vibrant Seattle neighborhood.

Kudos to all involved in finding such an elegant solution to preserving the arts on Capitol Hill, while solving other issues of affordable housing and office space in a joint venture with the private and public sectors. This is an outstanding example of development as a community building activity.

Posted by Wendy Ceccherelli at 8:22 AM