As a volunteer for the Real Estate Association of Puget Sound (REAPS), I have been given many tokens of appreciation - which I enjoy! One of them recently was to select a few books from the stack distributed to top volunteers. One of the books that I selected was The Virgin Way: If It's Not Fun, It's Not Worth Doing by Richard Branson. 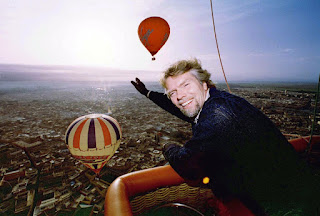 I had met Richard Branson at Malcolm Forbes' chateau in Balleroy, France after his attempt with Per Lindstrand to fly around the world in a hot air balloon (but that is another long story...). Who isn't fascinated by billionaire Sir Richard, his many adventures, his successful businesses, his joie de vivre?

The book was surprisingly fun and full of excellent tips, along the theme of "screw it, let's just do it!" The preface begins with "Life is too short. Don't enjoy it? Don't do it!," which is really the underlying theme throughout the entire 392-page book.

Here are a few excerpts that I particularly enjoyed that will give you a flavor for the book:

"I believe that 'luck' is one of the most misunderstood and underappreciated factors in life. Those people and businesses that are generally considered fortunate or luckier than others are usually also the ones that are prepared to take the greatest risks and, by association, are also prepared to fall flat on their faces every so often. In start contrast, the 'play it safe for fear of failing' brigade are the ones who just never seem to get as lucky as the risk-takers. Coincidence? I don't think so."

"...in the US the annual average sales per square foot in mall-based retail stores was $341...But the runaway leader was Apple with an astounding $6,050 in sales per square foot - nine times the national average...Even with a great product line like Apple's, fantastic results like this don't just happen - they are a direct consequence of something behind the numbers the techy analyst tent to overlook: excellent and plentiful customer service supplied by real people!"

"...the new vacation policy that has been adopted by Netflix, which might actually be more accurately described as being, well, no policy!...There is no need to ask for prior approval and neither the employees themselves nor their managers are asked or expected to keep track of their days away from the office...the assumption being that they are only going to do it when they feel a hundred per cent comfortable that they and their team are up to date on every project and that their absence will not in any way damage the business...The Netflix initiative had been driven by a groundswell of employees asking about how their technology-controlled time on the job...could be reconciled with the company's old-fashioned time-off policy...if Netflix was no longer able to accurately track employees total time on the job, why should it apply a different and outmoded standard to their time away from it? The company agreed...we don't need a vacation policy!"

"I have one very successful friend who...became so perplexed by the never-ending volume of spurious weekend emails that she put a weekend auto response message on her business email that says, 'I am away from the office until Monday attending to my other full-time business - my family. If this message is about something that cannot wait, then I suggest you call or text me, otherwise I will get to it on Monday.'"

"Shawn Achor's fascinating book The Happiness Advantage is based on a decade of positive psychology and neuroscience research and Harvard Univeristy and Fortune 500 companies. His book reveals that when we are more positive our brains are 'more engaged, more energised, creative, motivated, healthier, resilient and productive'...His conclusion is that ninety per cent of one's happiness is generated from within, not by external factors like fat bank accounts and expensive possessions. The book cites the power of positivity ... and how we can rewire our brains in as little as twenty-one days by ... things such as starting each day with a 'random act of kindness' like sending at least one email praising someone, or writing down three new things each day for which we are grateful...So, having fun and enjoying the work experience ... is not just the Virgin way but it is also scientifically proven to work to everyone's benefit."

His afterward summarizes his Virgin Way philosophy thus:
Not specifically a book on real estate investing, but a great book on leadership, success, and mindset that would serve any real estate investor or entrepreneur well.

Posted by Wendy Ceccherelli at 9:30 AM