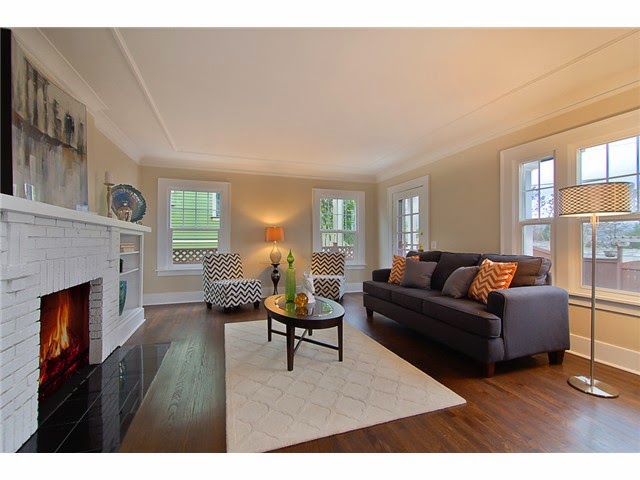 In yesterday's blog we looked at the Clifford C Lambert house at 2716 Harvard Avenue E. Its neighbor to the north is the Harry and Emma Stokes House, which was built in 1906. Harry Stokes was from Canada and his Stokes Company manufactured candy and ice cream, and also operated the Stokes Confectionary and Lunch Parlors. Harry and Emma Stokes lived at 2722 Harvard Avenue East until he died.

The house is a two-and-a-half story American Foursquare with a hipped roof and 2-inch exposure clapboard siding. A large hip-roofed porch centered over the main facade is supported by square pillars. The first and second stories contain original one-over-one, double-hung windows. Above the porch is a Palladian style window. A large hip-roofed dormer on the main elevation has a replacement metal sliding window.

Moving to the south of the Lambert house, we come to the William and Mary Chisholm House at 2712 Harvard Avenue East, built in 1908. William Chisholm was the owner in 1920, and vice-president of Merrill and King Logging Company.

The house itself is a two-story American Foursquare with a hipped roof and a hip-roofed center domer. Square pillars support the full-width porch-balcony. The balcony is enclosed by a simple railing. Original, narrow ten-light casement windows flank the second story door, which is of a later period. The house entrance is on the left side of the full-width porch. Most of the original exterior and interior are intact, but some front windows and window openings have been altered.

The Neoclassical Revival Duhamel-Parsons House is just to the south of this neighbor. It was built between 1903 and 1909, and is listed individually on the National Register. Architect and later builder Edward J. Duhamel designed, built and resided in this mansion, on the northeast corner of Harvard Avenue E and E Edgar St. It is known locally as the Harvard mansion.

It is a two-and-a-half story frame clapboard house. The roof was originally shingle, and is now composition. Modillions outline the house roofline and the roof of the front porch. A square porch is supported by four Corinthian columns that rise to the second story, as do the pilasters on either side of the centered front door. A balcony on the square porch roof is reached from a door in the centered front gabled dormer. Gabled dormers are on the sides as well. The original cut glass windows are intact. A terrazo-floored conservatory takes up more than half the width of the house on the east side.

Harvard Avenue East is a lovely street of fine, historic homes and mansions, which is highly visible to residents entering Interstate 5 North from here.

For a complete list of historic homes for sale in the North Capitol Hill area, please message HomeLandInvestment@gmail.com

Happy Investing!
Posted by Wendy Ceccherelli at 10:03 AM