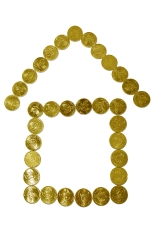 2014 Economic Predictions for Real Estate Investors
Real estate rents, wages, food, interest rates and energy prices will rise moderately in 2014.
Gold will trade $1150 - $1450 and silver will trade $18.50 - $23.00.
I predict 30 year owner occupied mortgage interest rates to go up to five percent by July and hover in the low fives through the end of the year.  Commercial mortgage rates will be lower than residential mortgage rates because commercial banks will remain flooded with cash and have no one to lend it to.   Residential interest rates will creep up as the government withdraws stimulus from that part of the market in an effort to moderate housing price growth.
Wall Street funds that bought large portfolios of foreclosed homes will start to liquidate their single family holdings as a result of increasing adjustable rate mortgages (*many Wall Street investment funds bought houses with short term adjustable rate loans and those loans are either coming due or are looking at the probability of rising interest rates).   These Wall Street funds never intended to be permanent landlords (and they aren't very good at it). With home prices up this is a good time for these funds to start cleaning up their portfolios by liquidating their most troublesome and most price inflated properties.   The release of this inventory will put a downward price pressure in those markets who had the highest rates of appreciation from the trough.  I would be very cautious about buying into Las Vegas, Phoenix, San Francisco Bay and Southern California and if I already had a sizable profit tied to a property in one of those markets I would consider exchanging out of it.
I remain a huge fan of the Dallas-Fort Worth metro.  I do have a personal bias for telling you about that market because I am building and selling rental houses in Dallas and Fort Worth, but there are a lot of other really smart people who are very bullish on Texas.
I am also intrigued by Charlotte, Denver, Atlanta, Miami, Tampa, Washington DC metro, Portland, and Seattle.
Bit coin will get more media attention, but its pricing will become even MORE volatile such that only the blackmarket economy will really accept it for payment.  Governments around the world will find a way to tax bitcoin.
Stock prices will become extremely volatile in 2014.  Watch for heart wrenching price swings of 10-15% up and down in a given month.  Stock traders will make record profits in 2014.   Stock investors will end the year sideways or down.
The unemployment rate is much worse than the published numbers because many people who have expired off of unemployment benefits and have stopped looking for work or they have moved onto the rolls of Federal disability.  States pay for unemployment benefits but the Fed pays for disability so cash strapped states are moving people off unemployment benefits and onto Federal disability benefits as a way of balancing their budgets.   Those on disability are not counted as unemployed.   Expect to see a jobless economic recovery.  The gap between the affluent and the poor will widen because the affluent make money by owning assets which are inflating in price while the poor make money selling their time but there will be fewer and fewer jobs for unskilled workers as a result of increased environmental protection legislation and higher minimum wage laws.
"The best way to help the poor is to not be one of them." - Laing Hancock
2014 will be a prosperous year for many.  Be careful not to sucked into speculative investments because fiat currency will be causing malinvestment everywhere.  If you are looking for a fast read on how fiat currency manipulation leads to bad decision making I highly recommend reading "The Clipper Ship Strategy" and "Whatever Happened to Penny Candy" by Richard Maybury.
A mentor of mine once said, "There is no such thing as a good or bad economy"  You can only be skilled or unskilled in your interaction with the economy."
To see more on David Campbell, please visit his website at:
www.HasslefreeCashflowInvesting.com
Happy Investing!
Posted by Wendy Ceccherelli at 10:46 AM

Wendy - thanks for sharing my economic predictions for the coming year.

Here's to your success!