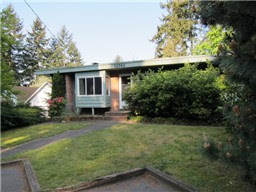 There are 265 bank-owned, foreclosed properties in Seattle currently listed for sale on the NWMLS. Tomorrow, we will be offering a FREE tour of five of those properties. The tour begins at 1 pm, at the first house on the tour: 12743 3rd Ave NW in Broadview.

Of the 265 bank-owned (or "REO") properties in Seattle, the average REO has three bedrooms and approximately 1346sf, and the current average list price is $226,000 (median price of $180,000 - which means half the REOs cost more and half the REOs cost less).

There are three REO properties with asking prices over $1million. The most expensive REO currently listed is a seven bedroom waterfront home with 4560sf that has been on the market for 831 days. It is offered at $1,329,000. Tax-assessed value on this home is $1,680,000.

Popular neighborhoods like Ballard have only four REOs currently listed; Fremont, Maple Leaf, Green Lake and Leschi each have one; Greenwood three; and Haller Lake four. Capitol Hill has two.

Our tour tomorrow focuses on three bedroom homes in more desirable neighborhoods of Seattle like Broadview, Greenwood, Green Lake and Ballard. No reservations are necessary, and the tour is free. For more information, please call our 24/7 real estate recorded information line at 888-621-4999 x4.
Posted by Wendy Ceccherelli at 12:10 PM