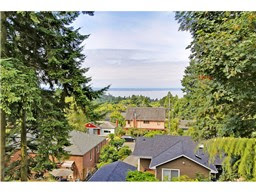 RealtyTrac reports that there are 1million homes nationwide that should have received default notices or gone to foreclosure auction, which will be delayed into next year. In addition, the length of time it takes to foreclose on a home has increased. Some believe that this "shadow inventory" of foreclosures will forestall the housing market recovery until at least 2015.

Seven investors and homebuyers showed up for yesterday's Tour of Seattle Foreclosures to take a look at five 3BR foreclosed homes in nice North Seattle neighborhoods of Broadview, Green Lake, Greenwood and Ballard. A few of them are considering making offers on these homes. As mentioned in my previous post, there are not a lot of foreclosures in these nicer neighborhoods of Seattle -- but do they represent a significantly better deal than prices offered by private sellers?

Let's take a look at the statistics for this particular area of North Seattle as an example.

According to the NWMLS, there were 28 sales of banked-owned 3BR single family homes in this part of North Seattle in the past six months. The median sales price of these homes was $332,500, and they sold on average in about 87 days.

During the same timeframe and in the same area, there were 354 sales of 3BR single family homes sold privately. The median sales price of these homes was $400,000, and they sold on average in about 47 days.

So while bank REOs represent only 4% of the total inventory, approximately 7% of all sales of 3BR homes in North Seattle in the past six months were REOs; they were sold at a discount of approximately 17% of other sales prices (eg. sold for 83% of the value of private sales); and they took 85% longer to sell.

So yes, REOs do represent an opportunity for investors and other buyers to get a home at a good discount. Patience and due diligence are key in finding the right bargains for homebuyers and investors.
Posted by Wendy Ceccherelli at 12:44 PM