I am leaving for Australia tonight to compete in the World Championships for dragon boating with my Washington women's masters team (WAM), pictured here: 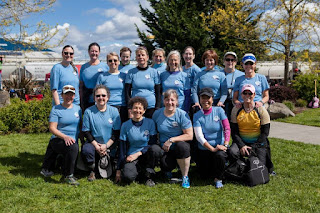 We are 25 hand-picked women on the 50-plus team’s roster., which trains up to three times per week in Seattle. My teammates come from four different clubs within the Puget Sound region.

The WAM team performed impressively and finished second to perennial powerhouse Wasabi Paddling Club of Portland at the Pacific Regionals in Vancouver, Wash., in August.

The Portland team announced in October that it decided not to go to the world championships, giving the Pacific Region’s automatic berth to the World Championship to the team from Washington.

Until that announcement, WAM was still hoping to possibly land the United States’ fifth and final wild card berth to the world championships in their women’s masters division based on how well they performed in tight races against Wasabi.

WAM lost three 250-meter races to Wasabi by less than one second combined, then beat Wasabi in one out of three 500-meter races.

In total, five U.S. women’s 50-plus masters teams totaling 125 competitors will be headed to the world championships in Adelaide. We will be competing April 1-3. Watch these posts or the Facebook fan page "WAM Goes to Australia" for updates.

I will be blogging as much as I can while I am traveling. I will be building my travel-related business as well, while I travel to Hong Kong and Abu Dhabi, in addition to several cities in Australia. I definitely believe in making your dreams a reality NOW, as opposed to putting them off to a "someday" that might never come...