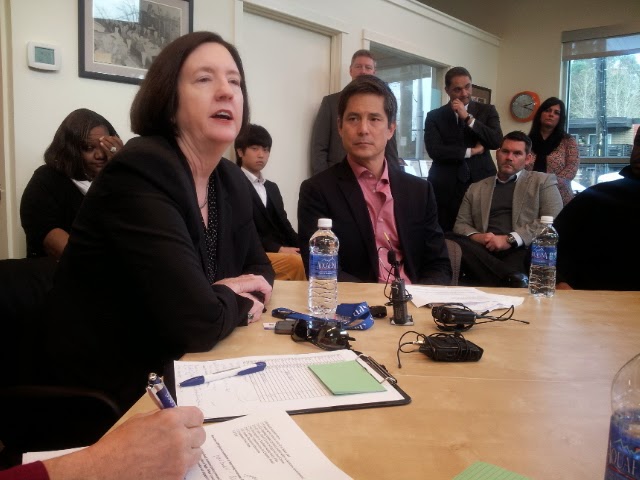 I was happy to attend as a developer in the Rainier Beach community, along with a packed house of other residents and business owners. Public safety is certainly a big concern for any business hoping to attract customers, residents and retail to the neighborhood. And Police Chief O'Toole made it clear that she sees her role as a partner in the economic development of the Rainer Valley.

She spoke highly of the South precinct and its personnel, and their success in the last six months in decreasing crime rates by sizable amounts (e.g. robberies decreased by 34%) and in making some significant arrests related to a recent homicide, stabbing, and drive-by shootings. One of the departments top priorities is to identify and "bring to justice" the perpetrators in the recent robbery at the King Donut shop.

Chief O'Toole noted that Seattle is one of the safest cities in the country, but that any crime was too much crime. There is a perception that there is more crime in the Rainier Valley, but in fact, downtown Seattle may be even more dangerous. Nevertheless, Chief O'Toole is encouraging police officers to engage community in a smarter way, to strengthen community policing efforts, to really respond to community issues and to allocate police to places that they are needed the most. This means doing ongoing analysis of the highest crime locations, identifying the most prolific offenders and frequent crime victims.

Chief O'Toole is particularly concerned about youth violence, which she sees as the number one challenge in the south end of Seattle. She would like to have close lines of communication with youth program providers, keep youth in skills-based programs, and help get them jobs.

She has visited the Rainier Valley more than any other precinct since she was hired, attending five "Find It Fix It" walks in this area with City of Seattle and local community leaders (see my earlier blog post here). Her department is working with Seattle University to develop unique community policing plans for each Seattle neighborhood, including the 15 that comprise the South Police Precinct jurisdiction.

Happy Investing!
Posted by Wendy Ceccherelli at 10:33 AM