Look at all those building cranes all around Seattle! (Well, at least north of the ship canal....) Those developers must really be raking in some dough, don't you think?

Well, apparently the City of Seattle must think so too, as City staff is not above skimming off some of that wealth to fatten City coffers. Those busy developers never check their invoices from the City anyway...do they?

First, the hapless developer is forced to pay for a City permit from the Department of Planning and Development for the privilege of developing in the city. This is standard practice, and one would presume that this fee is set to encourage the right amount of development, and not serve as a deterrent to the type of development the City seeks.

The City exercises oversight by requiring the developer to go through a public review known as Design Guidance. To add a few extra shekels to the City coffers they now require an EXTRA review, know as EARLY Design Guidance (EDG), for which of course they charge an additional permit fee PLUS staff costs.

The staff costs are billed to the developer at $250/hour. That's right, $250/hour whether the staff member is taking minutes at the EDG or booking a room for it. That's right, the City staff charges more than my accountant, attorney, builder or architect charges as an hourly rate. Mind you, this is in ADDITION to the permit fees the City collects.

And would it surprise you to know that the only accounting for the hours charged by Seattle Department of Planning and Development staff is the hours that the staff member logs into the computer - without any notation of whether they did any work, nor what specific work was done? This allows City staff to sit at their desk twiddling their thumbs, while charging some "rich" developer $250/hour.

Can this possibly be true? How would a small developer in the barren swath of development known as Rainier Beach have uncovered such an allegation? 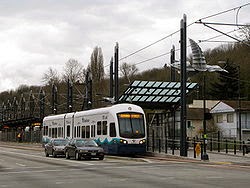 Our Van Gogh Studio Lofts project on South Henderson Street at the Rainier Beach Light Rail Station was required to go through EDG - despite being the ONLY transit-oriented development (which the City of Seattle claims to want) at Rainier Beach (a neighborhood the City claims to want developed) for artist live/work (City is allegedly also considering a fast-track permitting process for cultural amenities; but not in time for this project), market-rate apartments (which both the City and Rainier Beach community leaders have requested). This added cost and time to our project.

Because of the size of the personal investment I have made in this project, the speculative nature of this development, and the increasing costs of construction, this project has been stalled. Without a push from me as the developer to the City staff at the Seattle Department of Planning and Development, it took FOUR MONTHS for the staff to provide minutes of the EDG meeting. Mind you, my architect did all the work in putting our EDG package together, all public comment was favorable, and we were approved to move forward to Master Use Permit (more City fees). Basically, nothing happened between June and October when we received our minutes. Then we received TWO bills, one in November, and then mysteriously another one in December for many hours of City staff time done during those four months when nothing was happening on the project.

A public disclosure request for an accounting of those hours revealed that there was no documentation and no substantiation for any of the hours for which this developer was billed.

A complaint to the leadership of the Seattle Planning and Development Department resulted in a phone call and email from Sue Putnam to me, offering to waive the last bill and credit my project for one hour ($250, remember?) of future staff time. The communication was very careful to avoid expressing any responsibility for the shoddy accounting procedures.

I can assure you that ground-up development in a marginal market like Rainier Beach is a calculated risk, with no guarantees of profits. A developer will spend a huge amount of money upfront, and wait two-three years for profit, if any. The developer will have to look into a crystal ball and speculate what the market will be like that far in the future. The City of Seattle will be unable to tell the developer how much it will cost for their review and staffing throughout this process, and this is just one of many unknown costs for which a developer must budget.

So developer, builders and investors, beware. Be sure to check your City of Seattle Department of Planning and Development invoices very carefully. They may be but one of many con artists out there trying to rip off the big, bad developers in our city....

Posted by Wendy Ceccherelli at 10:02 AM