High-income earners have a new incentive to make after-tax contributions to a 401(k) plan: They can later shift the money into a Roth individual retirement account, tax-free. 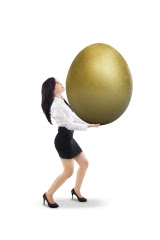 Thanks to a recent Internal Revenue Service ruling, eligible employees can now move after-tax contributions directly from their employer-sponsored retirement plan to a Roth account. The catch: They have to do it at the same time they roll their existing 401(k) pretax savings into a traditional IRA.

The potential tax savings are huge, depending on an investor’s tax rate in retirement.

Money in a Roth IRA grows tax-free and is not taxed when it is withdrawn, and Roth IRA withdrawals does not raise an investor’s adjusted gross income. That, in turn, can help lower Medicare premiums or the 3.8% surtax on net investment income.

The IRS’s decision helps high-income people funnel potentially significant amounts of money directly into a Roth. Normally, couples with adjusted gross incomes of $191,000 or more and individuals with incomes of $129,000 or more cannot directly contribute to a Roth IRA.

Most contributions to a company-sponsored plan are made with pretax money. That reduces a worker’s current tax bill, but withdrawals in retirement are taxed as ordinary income, at rates up to 39.6%.

Such withdrawals could push an IRA owner into a higher tax bracket.

Once a retiree hits age 70½, when required minimum distributions (RMD) from retirement savings kick in, the advantages of Roth IRAs become even more clear. Roth’s do not have required minimum distributions, while other savings do, and Roth withdrawals don’t run the risk of pushing a person into a higher tax bracket because they don’t count as income.

The new rules—which also apply to nonprofit-sponsored 403(b) plans—are supposed to go into effect next year, but the IRS said in September that investors could start making the transfers now.

The IRS’s announcement means that savers no longer have to follow complicated strategies to reduce their tax hit when moving money from a company plan to a Roth IRA. It also means that people whose incomes are too high for them to fund a Roth IRA now have a new way to do just that.

After-tax contributions to a workplace 401(k) can be shifted into a tax-free Roth account, the IRS says.

Savers who want to take advantage of the new rule must first contribute the maximum pretax amount to their 401(k) or similar plan. In addition, the plan must allow contributions of after-tax funds.

The total amount a worker can save annually in such accounts—including pretax contributions, pretax employer matches and after-tax contributions—is $52,000 ($57,500 for workers 50 and over). The added after-tax dollars allow them to accumulate far greater savings that can be eligible for Roth conversion at retirement.

Even now, after-tax contributions—if allowed by the plan—could make sense for people who have extra cash they won’t need until they are 59½ or those who have unique or low-cost investment options in their company plans, experts (experts…really?) say.

The latest decision gives people an easier way (really?) to distinguish pre- and after-tax contributions and maximize (really?) their potential tax savings, making it much easier to move tens or hundreds of thousands of dollars (really?) they have had accumulating in their 401(k)s into a Roth IRA with no tax bite.