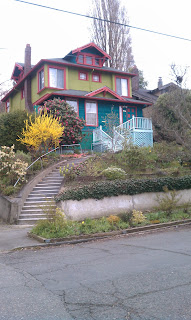 The latest report from the NW Multiple Listing Service, with specific Seattle stats

The latest report from Northwest Multiple Listing Service shows 7,570 pending sales of single family homes and condominiums during March. That's down about 12 percent from a year ago when members reported 8,605 pending transactions (mutually accepted offers) across the 21 counties in the Northwest MLS service area.

Most observers consider last year's first two quarters to be an anomaly, as tax credits provided an unusual stimulation to home buying patterns. A comparison to two years ago reveals a double-digit jump in pending sales. Area-wide, the volume is up nearly 33 percent, rising from 5,701 pending sales in March 2009 to 7,570 for last month. For the fourcounty Puget Sound region, pending sales spiked nearly 42 percent compared to two years ago (from 4,266 to 6,049).

Buyers have plenty of choices, although the selection is smaller than a year ago, reflecting fewer new listings being added to inventory. Members added 9,812 new listings to inventory last month, which compares to 12,994 additions for the same month a year ago. At month end, the Northwest MLS database included 33,444 active listings, including 28,146 single family homes and 5,298 condominiums. That's a
drop of 5,272 properties, a decline of 13.6 percent.

Yet, some urban core neighborhoods, such as Greenlake and Queen Anne in Seattle, are seeing very strong demand, and a waning supply of desirable homes for sale.In fact, the $377,000 median sales price of Seattle homes sold in March is practically unchanged from last March median sales price of $377,750.

Distressed properties continue to drag down prices virtually everywhere outside of Seattle. According to research by the National Association of REALTORS®, nearly one of every four home sales (24 percent) in Washington is classified as a short sale or foreclosure.

Northwest MLS members reported 4,590 closed sales of single family homes and condominiums last month. That total represents a drop of 7.7 percent from twelve months ago when members notched 4,972 closings in the NWMLS service area overall. Prices on last month‟s closed sales system-wide declined about 8 percent compared to a year ago. The area-wide median sales price was $242,925; a year ago it was $264,470

Commenting on the latest nationwide report on pending sales, Lawrence Yun, NAR chief economist, said “We may not see notable gains in existing-home sales in the near term, but they‟re expected to rise 5 to 10 percent this year with the economic recovery, job creation and excellent affordability conditions providing confidence to buyers who‟ve been on the sidelines....Pending home sales have trended up very nicely since bottoming out last June, even with periodic monthly declines.”

Northwest Multiple Listing Service, owned by its member real estate firms, is the largest full-service MLS in the Northwest. Its membership includes more than 22,000 real estate brokers. The organization, based in Kirkland, Wash., currently serves 21 counties in Washington state.
Posted by Wendy Ceccherelli at 5:32 PM